oppa you’re my everything batch 44 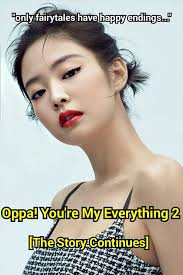 13
💖Oppa! You’re My Everything 2
[The Story Continues]
💛Episode Thirteen 💛

After Hyuna had calmed down, I introduced she and Sarang to each other. Sarang was still freaked out about how Hyuna had bur-st in with a knife …….I still can’t believe it either but I would be lying if I said I wasn’t finding it funny that she had believed that I was cheating on her with Sarang 😅😂

“So let me get this straight……this woman that barged in here with a knife is your girlfriend?” Sarang asked for the hundredth time. We were now seated in a circular formation in the living room with cups of warm tea placed in front of us…….it was almost 11PM
“Yes she’s my girlfriend” I replied and Hyuna coughed
“Umm Sarang, I’m really sorry things started out like this. I never intended for our first meeting to be like this. Believe me when I say that I’ve been expecting you and I’m so glad you arrived safely” Hyuna said and I smiled at her. Sarang scoffed
“Well I can’t say that I’m happy to meet you. What kind of a crazy deranged person barges into her b©yfri£nd’s house and threatens him with a knife?!” Sarang retorted and Hyuna’s face fell
“Oh c’mon Sarang, don’t be rude. Hyuna alre-ady apologized so why are you still on it?” I asked impatiently and she turned to me, glaring at me

“Easy for you to say! Do you know how scared I was? I thought she was going to kill you! I don’t care if she’s your girlfriend Khyun………..she has some loose scre-ws in her head that she needs to ti-ght£ñ!” Sarang snarled and Hyuna and I [email protected]
“Now, if you’ll excuse me, I’m tired and I’m going to be-d” she added curtly and walked out of the room before I could say anything else.
What the heck is her problem? Why is she acting like this towards Hyuna? 😕

Hyuna sighed and [email protected]£ to sit beside me
“Oppa……..I’m really sorry…….”
“No, I’m sorry for not contacting you, the truth is I never expected that the project would take longer than 3 days. I just thought I would be back as quic-kly as I left but I got there and i was so busy that I didn’t even have time for anything else and I would have called you yesterday when I flew in but I had been jetlagged since last night. I couldn’t even get out of be-d this morning, Sarang had to bring me my breakfast in be-d” I said and she nodded slowly. I reached for her hands and held them in mine

“Babe, I’m really sorry okay? plea-se forgive me” I pleaded with puppy dog eyes and she giggled
“It’s alright, you know I can never stay mad at you especially when you make that face” she smiled and I chuckled
“I just wish your sister can forgive me too” she added with a sigh
“Don’t worry about Sarang, she tends to be grumpy sometimes but I’m sure she’ll come around and fall de-eply in love with you like me” I @ssured and she giggled
“You’re so silly” she laughed and I k!$$£d her hands
“Babe I really missed you” I purred, pu-lling her closer to myself
“I missed you too…….you honestly have no idea how much I did” she whispered and I smiled and k!$$£d her forehead and her nose.

He planted a k!sson my forehead and my nose, ma-king me smile
“I love you, Kim Hyuna” he muttered with our faces just inches [email protected]
“I love you too, Lee Baekhyun”
He crashed hisl-ips on mine and I quic-kly reciprocated like a hungry beast which had just been freed from its cage. I had been starved of his knee-weakening k!sses and now it feels so good to taste his softl-ips again. His ton-gue sought entrance to my mouth and I granted him access without hesitation, wra-pping my hands around his n£¢k so I could hold him ti-ghter and never let go.
Soon, I was lying beneath him on the couch with my legs wra-pped around his [email protected]!st as we continued the heated and [email protected] k!ss. He broke the k!ssfor air and buried his face in the crook of my n£¢k as we caught our breath

“I have to be on my way soon” I said in a breathless voice
“You’re staying over tonight” he muttered still breathing heavily and I [email protected]
“Wae?”
“Cause it’s almost midnight…..?” He replied and I [email protected] my forehead, I had totally lost track of time
“But I still have to go, I didn’t plan to sleep over, I didn’t bring anything of mine” I pointed out and he lifted his head so I could look into his ever beautiful eyes
“That’s not a problem, you can shower and change into one of my comfy shi-ts for be-d” he shrugged and I sighed
“The offer is very inviting but I still have to call Welchi and let her know that I will be slee-ping here” I said as we both resumed our sitting position
“I don’t know who that is but do what you gotta do, I’ll go make sure there’s a room re-ady for you” he uttered and k!$$£d my forehead before walking out of the room .
I smiled sheepishly and [email protected]£d my phone from a table nearby before dialing Welchi’s number

📱”Hello? Welchi I have sad news” I began immediately she picked and I heard her [email protected]
📲 “oh my gosh! Don’t tell me you stabbe-d Baekhyun and now he’s in the hospital?!”
📱”what! No! St©p talking nons-en-se and just listen to me” I said rolling my eyes
📲 “then what is the sad news that you have?”
📱”I won’t be coming back, I’m spending the night here so you’ll have to take care of my [email protected] for me tonight” I replied and she squealed
📲 “yippee! I’m going to have so much fun without you!” She skrie-ked and ended the call before I could say anything else. I shook my head at her and switched off my phone

Oppa walked back in smiling
“Are you done?” He asked and I nodded
“Yes, looks like I’m spending the night here” I announced and he chuckled before holding out his hands to me
“C’mon, it’s time for your shower” he said and I giggled before placing my hands in his and letting him lead me upstairs.

I walked out of the guest room bathroom with a towel wra-pped around my che-st and another one around my hair like a turban. I loos£ned the turban and let my w€t hair down before picking up the shi-t that Oppa had left for me on the be-d and putting it on. It was a black plain shi-t that st©pped way above my knees, leaving a good amount of my th!ghs expo-sed.
I sli-pped out of the room and wandered down the hall until I found myself in front of Oppa’s room and surprisingly, his door was wi-de open.

I walked in and saw him lying on his be-d shi-tless with headphones on. He sat up in be-d and smiled in such a way that showed only his upper teeth when he saw me.

“Wow” he muttered, taking off his headphones and walking to me. He was wearing only a pair of loose trou-sers
“What? ” I asked with a giggle, b!tt!g myl-ips s£dûçt!velywhile trying not to drool over him and how h0t he looked without a shi-t on
“You’re looking very tempting” he replied, looking over me from head to toe, his eyes lingering on my th!ghs which were left expo-sed by the shi-t
“How do you like me wearing your shi-t?” I whispered, running my hand all over his che-st. He leaned in until ourl-ips were just a breath away
“Ifu-cking love it” he breathed and claimed myl-ips with a k!ss. I k!$$£d him back, wra-pping my arms around his n£¢k.

In just a matter of seconds the k!sshad become intense. He slid his hands un-der the shi-t I was wearing and cu-mpped my ba-re @ss, lifting me up and I quic-kly wra-pped my legs around him. He tore hisl-ips from mine
“F**k, you’re driving me crazy, Hyuna” he growled and claimed myl-ips again. He pressed my b©©b s throu-gh the shi-t and I [email protected] ed into his mouth
“I want you so bad” he whispered into my ear as he k!$$£d and bit my n£¢k softly ma-king me [email protected] with reckless abandon.