The dairy of lia mark episode 17 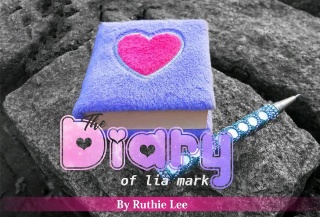 THE DIARY OF LIA MARK

I stood still staring at derrick on the door, he just said he

loved me that I’m his world and everything..

I want to tell him to get lost, to just stop saying all of this and

be the Derrick I once knew.. To stop reminding me of our

accidental kiss, but I couldn’t I felt a very huge lump in my

throat as I saw a glint of sadness in his eyes..

I don’t want this derrick I want my old Derrick, because now

that he has say all of us, I don’t think we can be best friends

again or even friends… Leave Derrick..

I want to tell him but I couldn’t,

“I said leave, I can’t believe you still had the fucking guts to

want to listen to, and you even had to say it in my face.. ”

Derrick glared at Logan, then brought his gaze back at me..

“goodbye princess, I’m really sorry for telling you all this but I

just couldn’t keep it to my self, I’m sorry” he said, sighed sadly

and walked away and Logan angrily slammed the door

startling me a little..

“piece of shit!” Logan cursed and turned to me.

you okay?” he asked calmly

loves me how the hell will I be okay.. I wanted to say but I

couldn’t.. Logan moved closer to me and hugged me..

“look it’s okay, just leave that good for nothing badass he

doesn’t deserve you as a friend, just look on the bright side

badass but also want to smack my self for defending Derrick…

“but really, Lia I don’t see what’s there to cry, he just said he

strong and laughed in his face, he told you to get lost and

then one day he’s telling you he loves you, and in front of my

face, that dude is a total maniac” Logan said still hugging me

and I welcomed his warmth and cheerfulness, he’s awesome..

But he’s right, I shouldn’t be crying..

I sighed on his chest and slowly wrap my arms around him, he

seemed shocked but embraced me even tighter.. I think I like

comes out still horsey and low..

“sure thing princess” he said and I sighed

“don’t call me that” I said softly and he laughed,

It totally reminded me of, ‘you know who’

After we disengage from the longest hug ever I cleaned my

tears and moved my blond hair back and then Logan smiled

small smile on my face,

He just cheered me up and I am glad it worked, I’m glad

there’s another person who can cheer me up aside from

“see you totally want it, that’s why you didn’t say anything,

classic you” Logan whined and Chuckle..

“so what do we have, I’m hungry” I said and sniffed

“well.. You’re clearly still not okay and I’m stressed out, so I’ll

just microwave some cinnamon rolls” he said and I nod..

“thanks” I said without smiling and head upstairs to ‘our’ room

I was laying on my stomach on the bed, studying math, when

Logan walked in with our dinner, I quickly sit up as I

know right?” he replied and I nod..

as he took a bite out of his dinner..

“what? Why?” Logan asked and arched his brows..

saw today, Carlos and Carter they’re way to nice, I like them” I

said and he tilt his head in confusion

“and who are they?” he asked

“you don’t know them?” I asked surprisingly and he nods

“yeah I Was, it was pretty fun then” he said and I stopped

“fun! Do you even realise what you’re saying, do you even

me a look and his smile subdued

“I am more than your mom, I am your wife” I snapped at him

I don’t like it, and what I just said was kind of weird..

“w-well sorry, why are you being angry all of a sudden” he

“I don’t know, I’m sorry” I sighed and moved my hair behind

He suddenly Chuckle and I laughed

“you’re one funny person” he said and I rolled my eyes..

“oh.. Right, he’s dead” he said and I put on a surprised look

even though I know he’s dead..

“well what actually happened” I asked

“I was in grade eleven then, being the leader of the gansters in

school I felt unstoppable Like I was at the top of the world.. I

feared no man and liked doing things my own way, well my

dad and my elder sister Sally, went to England for months, and

should stay home to welcome my dad, but I insisted on going

to a party that I was the first person to get invited to.. My

mom got really mad at me and locked me in my room, but I

sneaked out since I go by no one rules.. After the party which I

got seriously drunk at, I staggered back home and was

surprised that my dad wasn’t home yet, I met my mom in the

when I greeted my mom, my dad insisted that he’d like to see

me that they could have been home but the traffic is horrible..

yell at me of how wayward I’ve become, not looking the road

he actually got hit by a huge lorry, ..

That night I couldn’t sleep I was scared to death, it was all my

fault I couldn’t blame anyone else.. I hated my self ,I hated

everyone around me, I stopped hanging out with my friends

cause I felt like some part of it were there fault too,, my mom

know I lost it, I told my dad to get lost and he did.. Everyone

everyone, and I-i left my old friends and stopped being the

badass gangster I was and that’s when I met Jason, we were

partnered up in a science project, the worst part of it was that,

Sally my sister died, she was such great person she’s so like

stubborn” Logan said and chuckles.. I know he’s sad about all

this cause the way he talked, like there was something behind

his throat and I know he’s trying to hold back his tears, ..

But I feel so sorry for him..

“I’m sorry” I said and suddenly realised I was crying

“why are you sorry” he asked calmly and raised his head up. “I

He moved closer to me and hugged me..

he laughed and I cried and laughed together..

It was 9pm after doing the laundry, I plopped onto the bed

right beside Logan who was all focused in his phone..

“hey” I called and he turned

“wanna watch a movie with me,?” I asked

cheek, while I shook my head negatively

get my laptop” he said

But I stopped him and said “no thanks, I don’t want to watch

Spiderman and monsterman, I’ll get my own laptop”

sarcastically and I smiled

“oh I do” I said and he sighed and shrugged..

“before we start, do you want me to cuddle you” he asked

“do you want to cuddle me?” I threw back the question

“okay we are not playing question for questions, just come

here” he said with a smile, while I sighed rolled my eyes I sat

some reason it felt weirdly comfortable..

We started watching the movie, we were both quiet and payed

so much attention, I snuggled my self up in Logan’s body and

he hugged me tighter and I could feel his smile on my hair..

After some time I started to get sleepy, it’s always in me

sleeping through movies, I yawned lightly and Logan said

closed the laptop carelessly dropping it on the small drawer.. I

laid down and so did he, he suddenly grabbed my waist and

moved me closer to him.. That our bodies were touching, I

was too sleepy to do anything, he held my waist tightly that I

could not even move..

I answered tiredly, slowly closing my eyes.. But opened them

“I love you” he said and I could hear my own Heart beat go..

I didn’t reply him I just moved closer and kissed him.. after the

kiss I slowly pulled away but he smirked and continued…