All the wrong reasons Episode 21 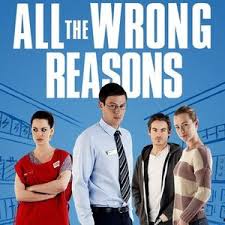 🌸ALL THE WRONG REASONS🌸
🌹 EPISODE TWENTY-ONE🌹

“You seemed glowing, Adrienne. Something you’re not
telling us?” Cynthia, one of her officemates asked her when
she and the girls were chatting at the corridor.
Adrienne shook her head. “No. Not really. I just feel better
than any other day in my life, that’s all.”
At the same moment, Justin appeared on the corridor.
She looked at him. He st©pped by her side. She didn’t
say anything, quite uncertain how she should behave with
him in front of her other female colleagues. The same ones
who drooled over him.
She was surprised when he put his arms around her
[email protected]!st.
“Pick you up after work?” he asked.
She smiled shyly and nodded. Then he bent down and
gave her a quic-k k!sson thel-ips. Then he looked at the
other girls and said, “Have a nice day, ladies.”
When he was gone, all the girls in front of her were
open-mouthed and wi-de-eyed, except for Jill.
“What the hell…” Cynthia started.
“Okay, so you’re the mystery girl?” Anna, the
receptionist asked.
“Mystery girl?” Adrienne echoed.
“Well, when Ivan, Garry’s new @ssistant, asked Justin
to go clubbing with him where he’d introduce him to some
girls, he told him he can’t because he has a girlfriend.”
Girlfriend.
That word made her heart skip a beat. She’s Justin
Adams’s girlfriend when he was known to dodge
commitments any chance he got. And now…he’s hers.
Somehow, she still couldn’t believe that all this was
happening to her.
“That’s why you are in full bloom! You’re shagging a
god!”
“Cynthia!” Adrienne knew she was red as an apple.
“This is very interesting,” Anna said. “I never thought
that guy could settle down.”
“We’re seeing each other. We’re not getting married,”
Adrienne stated.
“So, the IENNE on his car plate is actually short for
Adrienne?” Cynthia asked with a shocked expression on her
face.
“Yes!” Jill replied. “Trust me girls. They only have eyes
for each other. You should see them together. It’s like you
are a painting on the wall. They just look at you, but you are
inanimate and you don’t really exist.” Jill smiled.
“And you didn’t tell us about this, Jill. I can’t believe
you!”
“I didn’t know until last week, to be honest,” Jill
responded. “Apparently, they’ve been seeing each other for
more than four months now.” Adrienne glared at her.
“What kind of gossip columnist are you?” Anna asked
Jill.
“It made me feel bad about my abilities. Both as a
gossip columnist and as her best friend.”
“Come on, Jill. You alre-ady forgave me for it. You
alre-ady know about it now.” Adrienne giggled.
“Yes. Along with the rest of the world. You never let
me savor the moment for myself.”
Adrienne put an arm around Jill. “Don’t forget, I am
treating you and Yuan big time for this,” she whispered.
“Oh right. I have a right to shut up after all.” Jill
smiled.
They talked about going to Boston. Adrienne wanted a
break and try to see her father on a weekend. Yuan and Jill
would go with her—on Adrienne’s treat.
“This is big!” Cynthia said. “There will be at least two
guys in this office who will be heartbroken with this
information. How could they compete against Justin Adams?
And it’s not just a flir-ting kind of thing, it seems. It looks
serious.”
“Come on, ladies. We’re just taking one day at a
time,” Adrienne said and then she went back to her office.
She got an email from Jill after a few minutes.

To: [email protected]
Fr: [email protected]
Subject: You!
You have to wake up alre-ady! You’re not dreaming this
thing you have with Justin. It’s real! And you deserve it.
All of us can see that both of you are head over heels
for each other!!!
Even Mike thought so. He actually told me that Justin
suddenly st©pped being interested in women months ago.
They could only conclude two things. Either he’s turned [email protected]
or he’s got it bad for one girl. And that girl turned out to be
you! You’re so lucky, dear!
And to k!ssyou in front of a crowd like that?
Wow! Knowing that Justin Adams had been sli-ppery
and evasive with women…and now he’s suddenly mushy
and ro-mantic.
Mike says you are all he talks about! And that plate in
his car is like advertising to the whole city that he’s not
single anymore.
He’s in love with you! He hasn’t said it straight out.
But I bet you, you should be prepared to be Mrs. Justin
Adams in the future!
Jill

To: [email protected]”
Fr: [email protected]
Subject: Re: You!
Jill,
Thanks!
I AM head over heels with him and I know he’s crazy
about me. I don’t know if he wants to marry me, but I don’t
care about that yet.
What’s important is that we are with each other and
I’m happy. I’m not thinking about how this will end. Because
that’s how we started anyway. Not thinking how it will end
and how long it will last.
I am just happy and thankful for him. And yes, I do
feel lucky! I feel blessed every minute I am with him.
Happy?
Yen