The miracle I need 2 Episode 24 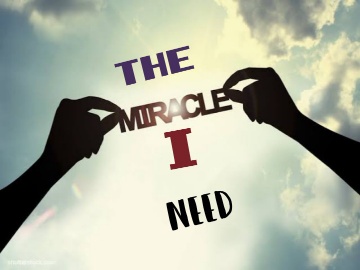 “So what is the award show about? And who are you giving an award to?” Kimberly asked curiously.

“When we get there you’ll see. Although I can @ssure you that you might meet some of your favorite celebrities,” Eric said with a grin.

“Let that be the surprise,” Eric said with a small smile.

Eric got out of the car once they got to the venue where the award show was being held and hurried to open Kimberly’s door. There were journalists in front of the place, taking pictures as some celebrities walked down the red carpet to go inside the hall. When most of them saw Eric and Kimberly, they approached them to exchange plea-santries with them.

“Meet my girlfriend, Kimberly. Baby, I’m sure I don’t need to introduce most of them to you,” Eric said, while Kimberly beamed with plea-sure as she shook hands with the men and [email protected] the ladies.

“The show is about to start, we should go inside,” Eric suggested as they all trooped inside.

“I didn’t realize you’re so popular,” Kimberly whispered to him.

“I’ve met most of them at one point or the other, but they know I don’t like my pictures being taken, so they respect my privacy,” Eric whispered back as he led her inside, her arm on the crook of his hand.

The hall which wasn’t very big was tastefully decorated, and everywhere was radiant and colorful. There weren’t many people gathered inside, but there were at least thirty persons, most of whom were celebrities. And this made Kimberly wonder what sort of award show this was.

She glanced at the stage where a popular OAP was standing and looked at the screen behind him which was displa-ying everything going on inside the hall.

An usher led them to the seats in front, and soon everyone was inside and seated. Kimberly didn’t pay attention to most of what was being said until Davido climbe-d the stage to perform his popular song ‘Aye’ holding a single rose flower in one hand. Soon the hall was filled with sounds of people humming and chanting the song along with him, and Kimberly was not left behind. She had a big smile on her face as she watched him. It wasn’t like it was the first time she was attending a show, but everything was different about this one.

Although her father had been a s£nator, she had felt like a nob©dy. He hadn’t even been willing to introduce her to people because he was so ashamed of her. So even when she attended award shows which mostly had to do with her job, she had never been seated in front like this. The only reason most people knew who her father was, was because of the few times she had been seen in his company.

Kimberly was slightly startled when Davido jumped down the stage and approached her while holding out the rose flower to her. She turned to look at Eric, seeking his permission, and when he smiled at her and gave her a nod, she reached out her hand and took the flower from him with a smile of appreciation.

Once Davido finished his performance, he left the stage and the OAP returned. He invited Bovi the comedian to entertain them briefly and Kimberly almost laughed her lungs out at his jokes. She couldn’t help wondering how the organizers of the show had managed to bring all her favorite artists to perform at the show. She couldn’t deny that she was having the time of her life.

She was enjoying herself so much that she didn’t notice Eric’s eyes on her until she turned to look at him, “Are you sure this is an award show? They are yet to pres£nt any award,” Kimberly whispered, and then raised a questioning brow when it occurred to her that he had been staring at her.

“Why? You’re not having fun?” Eric questioned.

“Of course, I’m having fun. I’m just asking,” she @ssured him, “Why are you looking at me, though? You’re not enjoying the performances?”

“You are more captivating than any performance on the stage, so I’d rather just watch you while you enjoy the show,” Eric said, and Kimberly looked away shyly.

Fredrick Leonard one of her favorite actors soon climbe-d the stage, and she noticed he was holding an envelope in his hand. So she relaxed, thinking that they were about to start pres£nting awards.

“Good evening ladies and gentlemen,” Fred said with his signature smile, and Eric watched as Kimberly’s face curved in a smile.

“You’re not going to dump me for him, are you?” Eric asked, ma-king her giggle as she turned to look at him.

“I have an open letter here with me, that I’m honored to re-ad out to someone’s special someone seated here. Can I go on?” He asked with a grin, and sounds of approval resounded in the hall.

The details of the letter were displa-yed on the screen for the others to re-ad along, while he opened the envelope in his hand and took out the letter which he re-ad out loud,
“My dream come throu-gh, this is just to let you know that there is no length I wouldn’t go just to put a smile on your face. You are the most beautiful woman I’ve ever set my eyes on in my entire life. I stare at you when you’re de-ep asleep and I can’t help but marvel at your beauty. You’re the strongest woman I know, and every day I am even more proud of you and every step you take towards becoming a better person. Your eyes are even more beautiful than a thousand stars, and I could stare at them for an eternity. Yourl-ips are the sweetest candy I’ve tasted, and I could feed on them forever, and your smile… Your smile puts the sunflower to shame. I love you baby, and there is nothing I want more than to spend the rest of my life with you! From your number one admirer and cheerleader.”

Sounds of “Aww” filled the hall, and even Kimberly felt her eyes tear up and she sniffled. She envied whoever the lady was. She didn’t notice Eric who was staring at her with an amused smile.

“WOW! This man must really love this woman!” Fred commented with a wi-de smile, and the others agreed with him as he dropped the mic and left the stage.

Next on the stage was Ramsey Noah, and he had a grin on his face, “I’m not so sure if this is an award show anymore,” He said with a chuckle, and the others laughed with him.

“With me here, is another note which I have to re-ad out before we call on my friend, Mr. Tunde Obasan to pres£nt the first award,” Ramsey said with a grin directed at Eric.

“Well, this note is titled, how I fell in love with you… I’m sure we are all curious to know how, am I right?” He asked, and they all called out their agreement, and the details of the note were once again displa-yed on the screen.

“It was your smile for me, from the very first moment I set my eyes on you. Watching you throu-gh the rearview mirror as you laughed while looking at your phone. I think that was the moment I fell in love with you,” Kimberly turned to look at Eric who was still looking at her with a grin, and she blinked in disbelief. This couldn’t be from Eric, could it?

She returned her attention to the screen, wanting to re-ad again before ma-king up her mind, “Then it was those ridiculous dos and don’ts which of course we never really kept,” This time Kimberly was sure it was from Eric, so she turned to look at him.

They both just sat there looking into each other’s eyes while Ramsey continued re-ading. Kimberly had different thoughts on her mind, but before she could voice any, Eric looked away from her when Ramsey st©pped talking and he realized it was his cue to go on stage. He stood up, and without saying anything to her he walked over to the stage.

“Thank you all for gathering here with me to honor this special woman whom I adore. Without doubts, I’m completely crazy about her as I’m sure most of you would have alre-ady realized after you received my invitation. My crown jewel, as you must have rightly guessed, the only person receiving any award here tonight is you. And that is for being the most beautiful, the most wonderful, the most forgiving, the most loving woman in my life… No offense mom,” Eric said with a grin, as his eyes moved from Kimberly to the other end of the hall. Kimberly followed his gaze to see his family, her father, Prisca, Chuka, as well as Pete and Kathleen, seated there. When on earth did they all get here? And how did they all pu-ll this off? Kimberly wondered as she turned back to look at Eric who was going on one knee.

“I know we alre-ady agreed to get married, but I wanted to make it official in the pres£nce of your loved ones, and your favorite celebrities. so Ogechi Kimberly Abamba, will you be my wife for the rest of your life?” Eric asked as he di-pped his hand in his pocket and took out a ring box which he fli-pped open without taking his eyes off her.

Displa-yed on the screen was a picture of them both walking down the red carpet, captioned with a bold “WILL YOU MARRY ME?”

How Kimberly managed to stand up from her seat and climb on the stage to meet Eric, was something she couldn’t remember. And neither could she remember what she said, but the next thing she knew was that a diamond ring was on her f!nger, and she was sobbing as Eric wra-pped his arms around her and k!$$£d her for all he was worth, while the audience [email protected] and cheered them on.