love me not episode 8 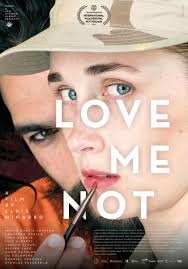 Ryan swallowed [email protected] and closed his eyes as he slowly bent his eyes moving hisl-ips towards ruby’sl-ips.
Meanwhile, Ruby kept her eyes opened with her face squee-zed while trying to push her face away from his comingl-ips.

“Do you wanna die?” Ryan finally heard ruby’s scary voice.
Shivers went throu-gh his spine as he quic-kly opened his eyes out of fear.

He looked at Ruby who was now opening her wi-de and big furious and red eyes towards him. If looks could kill, Ryan wouldn’t be alive.

“This never happened, Let’s just get back to work!” She interrupted yelling as they both started with their lesson.

That night, Beckey and Ruby la-id down to sleep.
Ruby kept facing the ceiling, She was thinking about what Ryan nearly did to her.

“What is she thinking about this time?” Beckey asked aloud.

Ruby looked at her and chuckled.

“Well… There is something I have to ask you” Ruby said

“What is it?” Beckey asked curiously facing her too

“Is it right for a lady to [email protected]£ someone younger than her?” Ruby asked.

“Whoaa! Hold on! Do you like a younger guy?”

“Huh? Hell no! Stop saying rubbish, It’s uhh… A friend of mine, She asked for an advise and I didn’t know what to tell her, So huh… What do you think?”

“Your friend huh?.. Ruby, When did you have a friend besides me, Are you sure it isn’t you?” Beckey asked laughing.

“Look at you, I have a bunch of friends at my old neighbourhood” Ruby answered.

” I was just joking… Well, Anyways… I don’t really like it though, Infact it’s not okay at all but is the guy handsome, tall and huh… Wealthy?” Beckey whispered.

“You guess so? That means that you are not really sure”

“Yes… Uh… He is tall, handsome and wealthy”

“Oh… Wow, Well… Thank you, I will make sure my friend knows about this” Ruby said

“Well… Alright but one last question though?” Beckey said

“And what’s that?” Ruby replied.

“How many years gap… plea-se, It should at least be just…uhh… I think 3 years difference” Beckey said.

It was Monday morning alre-ady, Both Ruby and Beckey lazily went to the school.

They wished they had the day off. They both held their arms as they walked. Most students who saw them on the way greeted them which they happily replied.

Barbara was standing by the wall waiting for someone, She looked at her expensive wristwatch angrily

“Why isn’t he here yet?” Barbara whispered angrily.

“Oh my God!! Goodness gracious! You scared the hell out of me!” Barbara said holding her che-st as she looked at the person.

It was Peter. He kept smiling as he looked at her.
He looked left and right, When he saw no one coming, He moved closer to her and held her [email protected]!st close to the wall.

“You didn’t answer my calls or even replied my messages” Peter whispered softly and slowly.

“I told you… I’m still angry with you” Barbara said.

“How could you say Ashley is more prettier than your girlfriend and you even laughed at me” Barbara said looking at his eyes.

The secret was that Peter was 18 years old while Barbara was 19 though she hid her real age from people and forged her [email protected]£ of birth with money, ma-king her 17 years old. Everyone would believe she was actually 17, since she still looked young and beautiful.
Peter and Barbara fell in love in school, They both [email protected]£d and quic-kly grew fond of each other despite pretending in [email protected] Peter also knows of her age secret.

That means we have 2 pupils who are 19 years of age in the last grade of school in Ruby’s [email protected] ,Ryan and Barbara.
Barbara also begged Peter to keep the relationsh!pa secret till further notice.
They were also faithful towards each other and never cheated.

“What am I going to do about you? Huh? My sweet Peter” Barbara said wra-pping her arms on his n£¢k.

“Though I was quite jealous” She added childishly spouting herl-ips

“Babe… I’m sorry , Do you know I was also jealous” Peter said.

“Hmm… When you called Ryan oppa” He answered

“Come on… you know I just pretended, I just had to follow the other girls as if I had feelings but Nah! You are the one for me, You know I and Ryan are both agemates so I find it comfortable to call him oppa unlike you… You are just 18 ma-king me older than you so sorry, No oppa calling for you till you manage to be older than me which I know can’t happen… you better not be jealous” Barbara smiled patting his head

“What if someone hears this?”

“Well… No one is here, I checked Barbara replied

“I love you” He whispered to her

“I love you too” She whispered back.

Peter slowly bent his head to k!ssher more de-eply but they both r0ûghly dis£ngaged from each other when they heard footsteps. It was Ryan and Martha.

They pretended not to be aware of each other.
It was as if they had just met each other now.

“Where are you guys coming from?” Peter asked.

“From the [email protected], She taught me some few questions” Ryan answered pointing at shy Martha who kept facing down holding some books close to her che-st.

“Hmm… But what are you guys doing here?” Ryan asked.

“Me?” They asked simultaneously.

“Well… I was on my way to the cafeteria, I should go…. I don’t know what Peter is even doing here,Were you following me? Goodness… Are you a stalker?” Barbara yelled leaving.

Peter looked at her and laughed, He faced Ryan who gently tapped him on the shoulder.

Peter later left and as he walked away, Martha gently looked back and chuckled lightly.

Ryan felt quite hungry and told Martha he wanted something to eat.
He left to the school canteen and bought a meal.

A lot of girls kept looking at him, whispering amongst themselves sweet but dreamy words.

A girl gathered her courage and went to meet Ryan.

“Here” She said stretching her hand towards him. She wanted to give him a can of chilled drink.

“Take it plea-se, I bought that for you so plea-se drink it alone”

“Huhmm,Well….if you insists” Ryan said as he collected it.

“It’s my love from me to you” She said bl-owing k!sses to him.

Ryan smiled awkwardly and quic-kly left the canteen.
He went to the [email protected], sat down and met Martha slee-ping. He looked at the drink and sighed.

“Hey” He called tapping her gently.

She woke up and looked at him, immediately their eyes met, She quic-kly looked down shyly.

“Here… Take this” He said giving her the drink.

“huh? you didn’t have to do this though” martha whispered

“It’s alright, Here” Ryan said stretching his hand before Martha who collected it.
Because of this, Her hand seemed to have slightly to-uched his hand ma-king her to blush and to get more shy too.

She quic-kly placed her head lower and smiled.
Without any thoughts,She looked at him.

“thank you” she said.

Ryan looked at her and smiled. He nodded and went back to his seat.

“I think i’m in love” Martha whispered to herself as she opened the chilled can of drink.

As she slowly drank the can of drink, She remembered what happened recently.

“Huh… Actually, I have an issue with a math problem, plea-se can’t you @ssist me?”

“Thank you, Let’s go to the [email protected] plea-se”

He was happy and grateful that he patted her head lightly.

“Thank you… You are quite good, Martha but someone is actually the best” Ryan said still patting her head and her hair r0ûghly danced to his hand rhythm.

She bowed her head low because she was quite shy and [email protected] A guy has never made her feel that way, Her heart beat increased that it never jumped out of her che-st but then she thought within her.

“who could be the best then?”

“Let’s go since we are throu-gh” Ryan said packing his books.

Martha nodded. After arranging everything, They walked slowly on the stair case.

Martha smiled and walked slowly. Martha was a slow girl when it comes walking, and one thing about her is that you would never hear her footsteps no matter the shoes she wore or even how polished the floor was.

She walked slowly and carefully without sounds when she met Barbara and Peter [email protected] each other.

“what in the hell am i seeing?” Martha thought.

That was when she heard everything they said including their secrets.

She later heard Ryan footsteps and looked down.

“huh… hmm, actually, i was waiting for you” she lied.

“Come on… Let’s go” He said to her walking fas-ter as his foot steps sounds increased.

Martha seemed to step on Barbara shoes which quite hurted her feet.

“Hey? Kid! Are you blind or what?” Barbara yelled.

“oh… i’m sorry, i didn’t notice your feet there” martha gently replied with her head low

“I don’t think you are sorry”

“huh? then what should i do then?”

“Come over and clean the dust you stepped on my shoe!” Barbara yelled.

“What? You even have the guts to say such nons-en-sity!” Barbara said

“well, if i dust your shoe, then i will have to spill your secret”

“think about it yourself, what secret do you think you are hiding?” martha asked as she raised her head up ex-posing her de-ep glaring eyes towards Barbara.

“Huh? Are you glaring at me? When did you learn that? Put your eyes away!” Barbara said angrily coming closer to Martha who kept glaring sharply at her. She was quite surprised to see Martha looking at her that way since it was the first time it had ever happened. That shy girl called Martha??

“I SAID STOP GLARING AT ME!!” Barbara shouted as she pushed Martha down the stairs.

Martha shouted as soon as she fell down. She hit her head badly.

Barbara looked and closed her opened mouth with her hands. Her hands trembled as she moved closer to Martha who seemed unconscious.

Barbara eyes [email protected]£ teary. She was confused and didn’t know what to do.

“Wake up… wake up plea-se , what is going on?” Barbara called slowly as she tapped Martha gently.

“Barbara? What have you done?!” a voice yelled.

Barbara gently faced back and met Ruby shaking out of fear.