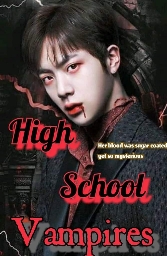 {An Hour Ago Before Tessa Arrival}

“Tess? Doris? You both done? Hurry? I’m late and you both are, too” Kristen, their elder sister who was 25 said.

She was outside, beside her car,, waiting for her two 18 year old, younger sisters.

She saw them run out of the house, and she smiled. Her smile vanished and a surprised look took over.

“Tess? What is that?” Kristen asked.

“What are you gonna use 3 hvge bottles of water for?” Kristen asked.

“She keeps complaining of unbearable and unquenchable thirst since last night… which happened to be her birthday” Doris explained.

Kristen looked at Tessa.
“Is it true?”

Tessa chuckled.
“Why? Do you think its the symptoms of turning into a vampire? You don’t have to worry… I was never bitten”

Kristen sighed, and nodded. She was a new member of dark hunters,, meaning she is gonna hunt down supernatural beings and make them go imprisoned and vampires were sure [email protected] of them.

They moved to Korea, from their country side after Kristen got a job to be a dark hunter.

“Come on, girls. We are late” Kristen said, and entered the car.

Doris giggled, and ran to the front seat, where she sat with her sister while Tessa sat at the back alone.

As soon, as her bu-tt t©uçhed the seat, she opened one of the bottle, and sat the opening into her mouth,, drinking the water like her life depended on it.

Kristen looked back and watched as Tessa drank the water. She arched her brows, trying to wonder what was going on with Tessa.

She covered the bottle, with the water, remaining past quater.

“Noona!” Doris called, before Kristen would say anything.

Kristen took her eyes off Tessa and took them to Doris.
“What’s it, Doris?” She asked.

“Look at the whole water she drank! Wow” Doris gushed.

Kristen took her eyes back to Tessa.
“Just so you remember, Tess. There is no restroom close by till,, we at your school so just stay without drinking for a while”

Tessa breathed [email protected]
“But I just can’t hold it. I keep getting thirsty”

Kristen exhaled de-eply and started the ignite. She began driving on the smooth road, down to her sisters new school by name, Morgan’s High.

“Since when did you start having this kind of thirst?” Kristen asked.

“Just like how Doris mentioned. Since yesterday,, immediately I clocked 18”

“You know what,, don’t get too worried. I’m gonna check what’s going on with you and get back to you later, got that?”

“Here we go again” Tessa added, and sighed heavily before taking back the opened bottle into her mouth and drinking away the last content.

She kept the bottle in the trash which was in the car and kept her head on the car rest. She looked up and sighed de-eply.

Her hand t©uçhed the old pendant around her n£¢k. She opened it and saw a picture of her real mum.

Though,, her mother’s face seemed to have been scratched away by a sharp object causing the pendent to be scratched white.

Tessa wasn’t the biological sister of Kristen and Doris. Though, she was loved and cared by them.

She really didn’t know much about her life. She doesn’t even know her mother’s face but still, she has this love for her.

Kristen’s mom found her and brou-ght her home, and that was it.

Of course, Mrs Links took her to be her biological daughter and raised her well with love and care before she died one night at the woods, and that was because of a vampire.

That was the main reason, Kristen grew her hatred for vampires. She began to train [email protected] in order to be a dark hunter so that she would revenge her mother’s wrongful death and bring down the vampires living within and out from them.

Doris was also born in the same month and year with Tessa, which happened to be an exciting coincidence. Hers was however 04/09/2004.

Tessa began to feel pressed all of the sudden and up till now, she still craves water.

“What’s happening to me?” She thought, getting worried alre-ady.

Doris looked back at her and smiled.

“I don’t have a pen. I was wondering if you had another to spare” She said.

Tessa ran her eyes around, trying to remember.

Doris nodded and turned back to the front. Tessa closed the pendant n£¢klace and quic-kly opened the next water bottle.

She couldn’t hold the thirst anymore. She drank half of the content, inhaled de-eply and closed the bottle.

She wiped the water off her mouth and took her bag pack which was sitting with her earlier.

She placed it on th!gh and opened it. She made her hand find it way into her bag, trying to find for the pen when something in there suddenly pierced her palm.

“You okay?” Kristen who heard the painful [email protected] asked, worriedly while Doris quic-kly turned her head over.

Doris nodded, and looked at the front away. Tessa sighed and got the pen out. The pen which was sharp pointed with its cover missing seemed to have pierced her palm.

She closed her bag pack Zi-pper, and looked at her palm which had a small cut. She was bleeding a bit.

Her eyes wi-dely opened, when she saw the cut closing up right before her very eyes. Her heart jumped and she blinked trying to see if it was real.

Her cut was alre-ady closed by now. She threw her hand down and swallowed [email protected]

“What was that?” She thought.

Doris turned over to her. She noticed the unusual look on Tessa’s face.

“Tessa?” Doris called but her mind was alre-ady far away, to nob©dy knows?

“What’s wrong with you? I’ve been calling you since” Doris said.

“See, I did warn you. I’m gonna pu-ll up here so that you can use the bushes but do hurry, I don’t want anyone seeing you. I don’t want complaints either, okay?” Kristen said.

“Tessa? The pen” Doris reminded her.

“Oh,, here” She gave her the pen which she collected, before muttering a thank you.

Tessa practiced inhalation and exhalation before opening the car door, after Kristen had st©pped the ignite.

She bent down to avoid any eyes and began to ease herself away.

“This feels like it” She smiled, closing her eyes trying to feel the happiness of the load flowing away.

She stood up and wore her Sk-irt back, and her un-derwear too. She opened her eyes and saw a handsome guy looking at her. Judging from his outfit, He seemed to be a student.

“Hey,, sweet blood” He finally said in a whisper which sounded super Se-xy and cooly.

She looked de-eply at him, and said nothing. Immediately his eyes sparked red, She screamed and ran away.

Jake who watched her, chuckled.
“She smells so sweet”

“What’s wrong?” Kristen asked, as she saw Tessa screaming, running towards the car. Kristen quic-kly started the ignite and rushed to her.

Tessa opened the door and she jumped in.

Kristen got back to the road again.

“What is it, Tess?” Kristen asked.

“You are behaving like you saw a ghost or something” Doris said.

“What? How do you know that?” Doris asked.

“Yes! He referred to me as sweet blood and his eyes…his…eyes. He-

“You know what. Let’s talk about it later at home. Come down now,, we are here” Kristen said, and st©pped the car.

Doris and Tessa walked out and looked at Kristen.

“Girls,, so sorry but I must leave now. I should be in work,, you know” Kristen said.

“Okay girls,, bye. I’ve talked to your teacher alre-ady so just go to her in the staff room. She will signal to you both” Kristen said, and started the car.

They both looked at her.

“Welcome to Morgan’s High!” She screamed.

Tessa and Doris looked at each other and smiled before turning back to see the beautiful, hvge school with hvge and all around wall fence before their very eyes.

Stay safe cause Auto banning is sweeping out ghost re-aders. About 51+ noticed.

Caution: Don’t use next, hmm, interesting, nice one un-der this post.

There are lot of things to talk about.