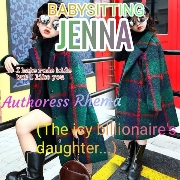 Suzy is still sleeping when Micheal got in

“Finally you’re back, we have been calling you” Jake said but Micheal didn’t reply he was busy looking at Irish who was standing beside Jake

“Peter I knew it, my mind kept telling me that it was you” Irish said

He sighed and tore his gaze off her before facing Suzy

“And the baby?” He asked

“I’m so relieved” Micheal breathed out and looked at Jake

“Will you mind, I need to tell you something” he said

“Make it quic-k we have to go home, Jenna is sleeping alre-ady” Jake replied

Jenna was busy sleeping on the chair inside the hospital

Irish sighed and sat at the edge of Suzy’s be-d, stroking her hair.

Micheal sighed when he got out,he looked at Jake and sighed again

“Will you just talk!!” Jake snapped

“I’ve finally gotten the answer to my questions, I know who my sister is” he said

FLASHBACK FEW HOURS AGO IN THE POLICE STATION**

“Will you mind, there’s something I have to tell you” Gloria said and Micheal looked at her

“I promise it won’t take long, it’s something he really needs to know” she explained to the officer

Gloria looked at Roman and Micheal motioned him to leave

“Will you just get to the point alre-ady” he said

Gloria chuckled and looked at him again

“After my husband planned your parents deaths, I had gone to that bus st©p to check if I could still save them, it was too late, I thought I was too late because the car had alre-ady exploded but then I saw her, she was lying on the floor, her skin was burnt because the explosion affected her, I took her to my secret hideout to stay”

“I remember the way she would cry a lot because she didn’t have any friends, everyone hated her because of her face, she would cry because her parents died, she would cry because she can’t find you, from her small age, she couldn’t sleep at night because she keeps getting nightmare, everyone bullies her because she was ugly until I gathered enough savings to take her to a hospital for plastic surgery, with that no one can recognize her anymore and the surgery at the young age lead to amnesia, I can’t keep her with me it isn’t safe so I took her to the park one morning, hoping when she wakes up she get to find new friends and a new life” Gloria sighed and closed her eyes

“Then years past and I c@m£ to my husband’s late parents friend’s parents birthday p@rty and I saw her, I knew she was the one, I recognized her she…

“Who is she?” Micheal asked

“Your friend Jake, she’s his girlfriend” she said and Micheal’s eyes wi-de-ned

“What!??” Jake almost screamed after listening to his Micheal narrated to him the story about his girlfriend Irish being his lost sister Ava

“Yes but I’m not sure, I think we should take a secret DNA” Micheal said

“Ion know, ion know how or what to feel about this I mean how can Irish be Ava” Jake replied

“So let’s take the DNA when should we take it?” He asked

“Ion know, I don’t want to tell Irish anything but maybe tommorow, I can get a piece of her hair” Jake replied

“That will do” Micheal smiled

“Hmm so Suzy, you know she’s going to be mad at you, the moment she wakes up” Jake said

“Good” Jake nodded and stood up

“Baby” he called and Irish looked at him

Irish nodded and tapped Jenna who was enjoying her sleep

“Get up” Irish raised her up

Jake chuckled and walked up to them

“Give her to me” he said, Irish gave him Jenna and he took her in his arms

“Goodnight Micheal” Irish waved, Micheal waved to and watched them both left

He kept c@r£ss!ngher cheeks and ru-bbing her hair, looking at her face till the day break. He didn’t sleep a wi-nk.

Jake sighed and re-moved his phone from his ears

“Hunny” Irish head just popped into the room, she was putting on an apron

“Baby” he replied, walking close to her

“I just made breakfast, aren’t you hungry” she said

“Coming” he replied and she went back downstairs

“Damn you Eric, if I find out that you’re ma-king me worry for nothing then I’ll kill you myself” he said before going downstairs

“Morning baby” Jake replied, he went to the kitchen to take the remaining food to keep on the dinning

They all sat, re-ady to eat

“Huh but why?” Jake asked

“I thought you guys have done that” Jake pouted

“Don’t miss us Jake, we’ll come see you in the office once we are back” Irish smiled

“I will still miss you both” Jake sulked

“Daddy is being a baby” Jenna said and Irish laughed out

“How I can’t believe you two are bullying me, just how” Jake scoffed and shook his head

“We are sorry daddy” Jenna laughed

Jake just chuckled at their behavior and shook his head.

Suzy eyes slowly flew open, she locked up, looking at the ceiling and the strong smell of the room, she could tell that she was in the hospital again

She slowly turned her head sideways to see Peter no.. Micheal just whatever, sitting beside her

Just looking at him now brou-ght back all the old memories back in her mind, painful memories, remembering this is ma-king her heart hurt again

A tear drop fell from her eyes, straight to Micheal’s hand and he opened his eyes immediately

He walked her slowly sat up before speaking

“No I don’t want to stay with you, I want to go home” she replied in tears

“I un-derstand you’re feeling this way but…

“But what!!, Are you not tired of ma-king a fool outta me, you must be so happy right, you fooled me, you…

“I was never fooling you, I have a reason why I was doing everything I swear” he said

“There’s no valid reason, I don’t want to see you can you let me go, I wanna go home” she cried

Micheal just sighed and stroke her back repeatedly

“At least wait for your dad, his surgery will start tommorow don’t you wanna see him”

“I don’t need your help let me go Micheal!! Let me go!!” She cried, trying to free herself from him

She kept crying and crying till she sle-pt off again

Micheal sighed and slowly placed her back on the be-d

“This is going to be h@rd” he muttered.

“You called for me?” She asked

“Yes, it’s time to carry out our final plan, the one that will benefit both me and you” she said

“Yes any problem?, They would soon be leaving so I need you to monitor them, monitor when they leave and st©p them” Naomi said

Irish stepped out of the mansion with Jenna, they were both dressed re-ady to go out

“Which mall are we going to this time?” Jenna asked happily as she followed her

They both entered the car

Irish chuckled and Johnny started the ride, it was going smoothly until another car c@m£ to block their front.