A night with him episode 14 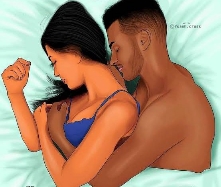 A NIGHT WITH HIM🌷🌌

Mrs Neave panicked as she glanced at the wall clock for the nineteenth time.

Damien is not yet back.

Another ro-mantic, action, thriller or family stories @:- Pizarena.com
It’s several hours past closing time.
He’s not someone who stays out late and not now that he knows she’s the only one at home.
Even if Damien wants to go out, he doesn’t go out in his school wears, he’ll come home,get changed,tell everyone of his movement and then leave.

He’s not even picking his calls, which made her more worried.

Damien and Irene had cried and blamed themselves when the doctor announced that she could no longer walk again and her kidney was starting to fail.
Irene vowed to get her surgery money by all cost cause she feels responsible for the incident, and that was when she dropped out of the university and started doing what she never wanted to.
“You sacrificed your legs for us so why shouldn’t i sacrifice my b©dy just to see you perfect again” Irene would tell her whenever she complains about the impure job.
She told Irene severally that she doesn’t have to do such just to raise her surgery money and get a kidney donor but she remained adamant, she and her brother feel they caused everything because she had been striving for what they’ll eat when the incidence happened.
They feel indebted to her and she hated to make them feel that way.
They are her children alre-ady and she’d do anything for them.
They’ve been so nice to her and never made her feel she didn’t have her own kids.
They called her mum the moment their father introduced her to them.

She never regretted she’s in this position just because of them.
They deserve it.

She glanced at the wall clock once more.

“I think I’m going to call irene” She said so worriedly.
She realized her phone was on the be-d.
She had dropped it there when she tried wheeling herself to the bathroom.
She was about wheeling herself towards her be-d when she heard the front door opened and closed.
She quic-kly turned to the door hoping it’s Damien.

Who else?
It should be him.

Her room door opened and Damien rushed in.
She couldn’t help but feel relieved.

“Mum I’m so sorry ” He said.
His face wasn’t so bright like always.
“It’s fine, take me to be bathroom first” Mrs Neave said.

“Am i missing something?” Harold walked into the kitchen interrupting their laughter.
He wore a white tee-shi-t which didn’t do a good job in concealing his abs,they showed effortlessly and Irene blu-shed when her eyes caught with his.
He had caught her staring at him.
Damn! Now he’s gonna think she’s like those nannies.
She blinked severally and faced the onions she was dicing but he kept appearing in her head.
He wore blue shorts which revealed his perfectly long legs laced with black curly hair.
Harold is drop dead gorgeous and she wouldn’t blame anyone for being attracted to him.
Anyone would, but she’s here to work not to find anyone attractive.
She’s just gonna st©p crushing on him, work till her mum’s surgery bill is completed and then leave!

Irene” Her mind taunted her.
“Irene was telling me what happened in the midnight” Nola laughed.
“Ohh…it was such a funny incidence. Irene did you told her the p@rt we met her asleep in the kitchen?” Harold tea-sed and Irene started laughing while Nola s£nt him a playful glare.
“Silly you! Leave or I’ll hit you with this spatula” Nola threatened playfully.
“Okay I’ll leave,I’m just here to gr-ab my wine” Harold chuckled..

“What’s for desert?” He asked opening the freezer.
“Strawberry shortcake ” Irene replied.
“Ohh…that’s gonna make Ivory so happy” He smiled.
“Is she still watching movie?” Irene asked.
“Yeah,she’s still at it.” Harold said.
He picked his favorite wine and then gl@ss cup.

Irene wondered why he c@m£ to pick it himself when he could have easily s£nt a maid.

“My patience is actually running out” Mrs Nola said, wearing a look that’s mean and funny at the same time, she slowly gr@bb£d a spatula.
Harold laughed and quic-kly headed for the door. “Chill, I’m leaving alre-ady”

“I hope dinner is gonna get re-ady soon,sleeper Nola” He tea-sed and quic-kly ran off laughing before Nola could pounce on him.
Irene smiled, are billionaires always this playful?
Com’on Irene,they are just humans like you and they have blood flowing throu-gh their veins.

“If only i had hit him with it last time, he wouldn’t have tea-sed me again” Mrs Nola sighed and rolled her eyes.
“He allows you hit him?” Irene asked.
“Why not? You’re surprised?” Nola laughed.
“Yeah”
“You don’t think a billionaire can be this playful? Well..not Harold, he plays a lot but when he doesn’t feel like it, you’d think he’s the most boring being on earth ”

you’re the only one he can be that playful with” Irene said.
“Not really, he plays with every of his workers but there’s a kind of limit to it” Nola said.
“But certainly,there’s no limit to yours” Irene said.
“I guess” Nola smiled.
“I’m jealous” Irene admitted playfully and Mrs Nola laughed…
“Com’on, you know I’ve been with Harold for years”
“Yeah i do, you both are virtually families now” Irene said.
“My daughter will be coming home by summer, i can’t wait for you to both to meet each other” Nola said.
“I can’t wait too” Irene smiled.
“I can tell she’s really gonna like you ” Nola said.
“Really?” Irene asked.
“Yeah, though she was always quarreling with Ivory nannies but you’re not like them” Mrs Nola said.
“I’m glad” Irene grinned .

Harold smiled to himself as he sipped his wine.

Was she really staring at him or he was mistaken.

He was not mistaken!
She was indeed staring at him and he’s not surprised about that.
Which lady won’t stare at him?
He’s Harold Marshall.
But why is he so happy he had caught her staring at him.
This is not the first time ladies would stare at him but he never get excited over it.
What’s she doing to him?

She picked Harold’s robe and wore it over her nightwear.
She know she should return his robe but she loves the feel on her skin.
She smiled as she slid her feet into her footwear.
She’s going to the libr@ry to re-ad beside the fireplace, she doesn’t feel sleepy yet.
She walked into the libr@ry and headed straight for the fireplace..
She arranged logs of woods into it and then lit it.
While the logs were burning up,she headed to the novel section and started searching for a ro-mantic genre.
She found one and then walked back to the fireplace.
The fire had circulated and it made the libr@ry brighter.

Irene settled down and started re-ading.

Harold walked into the libr@ry and was surprised to see the fireplace lit up, he saw Irene seated beside it, with a novel in hand and then sighed in relief.
He smiled noticing she was putting on his robe.
Why does she look that amazing even in a robe!
Her hair glowed brightly and lashes moved slowly.
She was obviously enjoying the novel.

gonna get more for her.
“Hey!” He said ma-king his pres£nce known.
She glanced up from the novel and saw him.
“Hi Mr Harold. I know i should have returned your robe earlier but I’m sorry” Irene said.
“No, it’s fine. You can keep it” Harold said.
“Huh?”
“Yeah,keep it. I have dozens of them and you don’t have any, it’ll be selfish of me to collect it back from you” Harold said.
“Ohh…Thanks so much Mr Harold” Irene smiled glad she would finally keep it for herself.

She loves the robe.

Harold picked out one of his mystery novels and went to sit beside Irene.

They were returning home after dropping Ivory in school.

“You scared me too the first time i saw you” Irene laughed.
Before they left Ivory’s school, a little girl had cried at the sight of Tom.
He’s so hvge.
“My height actually scares bad people away” Tom boasted.
“You think?” Eric asked.
“Ofc..” Tom was saying when he suddenly saw someone who lifted a high-powered rifle to his shoulder, taking aim at their car.

“Heads down!” He shouted but it was too late.
Gunsh0ts echoed in the car and Tom felt the heat of the bullet graze his cheek.
He heard Irene scream in pain and then knew she had been sh0t.