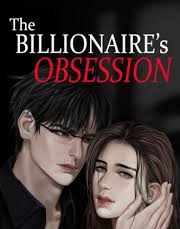 🔞THE
BILLIONAIRE’S
OBSESSION🔞
(Craving for the whole of her….)

By, [email protected] B.

Hearing her m-oan , Charles was tempted to rip off her clothes to have full access to her se-xy body. But no, he wasn’t gonna do that, not yet.

He stared at it for a while, a proud smile on his l!ps.

Hailey regained her s£nses at that moment. She quickly covered her ch-est with her two hands.

Hailey shot him a glare.

“We just klzzed now and you m-oan ed” he teased.

“I didn’t” she quickly lied.

“Just go away, I’m still mad at you” she muttered.

She tried to stand up but he quickly held her back, wrapping his arms around her possessively.

“Are you playing the innocent game right now?”

“I’m not. Tell me where I went wrong” he said seriously.

“You ignored me. You made me think you went to the club with Jace and I was having a sleepless night all because of it!” She blurted out before she could stop herself.

“You were sleepless because of me? Perhaps, are you jealous?”

“What? Am I jealous? Hahaha. In your dreams Mister” she rolled her eyes.

“Are we gonna be arguing just after a hot make out?” He asked.

Hailey blushed at the mention of that. She couldn’t believe they made out and she m-oan ed! Gosh!

“That was a….” She trailed off not knowing what to say.

“A what?” Charles asked.

His eyes flic-kered to her l!ps which were swollen as a result of the klzz they had not quite long. The sudden urge to klzz it again came and he feared that he won’t be able to control himself.

“Why do you love doing that?” He asked.

“Do you know it drives me crazy?”

“Stop, that ain’t gonna work on me” she muttered.

She stood up and quickly turned her back to him, smiling secretly.

She seriously needs to go for a check up with the way her heart keeps beating faster than usual.

“Then I should keep trying [email protected],” Charles muttered as he remembered her words.

Hailey turned to him in disbelief, her hands falling from her ch-est as she did so. She has totally forgotten she was covering herself from him.

“You still remember that?” She asked.

Charles smiled as he got out of the pool.

“Sure” his eyes went to her singlet. Mere looking at it, one could tell her bo-obs were big size.

“You told me to try [email protected] yourself, so I’ll keep doing that,” he said.

He bent to her ears.

“Go and put on your clothes. I’m afraid I won’t be able to control myself if I keep seeing you this way” he whispered.

He winked at her.

She turned and scurried off to the room.

Charles laughed heartily as he stared at her. This was the first time in years, he’s actually laughing because of a woman.

“I’m finally going crazy,” he muttered to himself.

Hailey was still rummaging through her bag when her mind went back to the klzz.

“That was so sweet…. No, no, it was awful” she quickly shook her head.

She fell on the bed.

“Mom” she muttered after she picked the call.

“My baby. Have you landed?” Leah asked.

“Yes. Mom, I think there’s something wrong with me” Hailey said.

“What? Are you sick? Is your Boss hurting you?” Leah quickly asked.

“No, it’s not that. My heart, I think I need to see a doctor. It keeps beating fast”

“Yes. Recently, I’m not myself anymore. I feel like I’m a changed person, I’m getting soft, Mom”

“Oh my! My baby is in love!” Leah screamed happily.

“It is. Whenever he’s around, you find your heart beating fast right?”

“You find yourself thinking about him all day long?”

“Yes, Mom. What are you trying to insinuate right now?” Hailey asked impatiently

“You’re in love, baby. I’m so happy right now” Leah smiled. It has always been her dream for Hailey to fall in love.

“I don’t believe that,” Hailey frowned.

“Listen here, Hailey. You’re not getting soft, you’re just paving way for love inside your heart. It’s not a bad thing to fall in love, okay?”

“You deserve a lot more than this, baby. I’m gonna have to tell your Dad!”

“Mom!!” Hailey shouted. Was telling her Mom about her feelings a bad idea?

“Telling you was a bad idea after all. I need to go, bye” Hailey said and quickly hung up.

“I’m in love with Charles?” She laughed.

“What are you thinking about?” She heard his voice.

He was standing before her.

Her heart started beating very fast and she remembered her Mom’s words.

Is she truly in love?

Charles frowned when he noticed she was de-ep in thoughts.

He bent towards her and held her chin softly.

His hand went to her l!ps and he freed it from her gentle @ssault.

“Stop bit-ing it. Let me bit ’em for you” he whispered before crashing his l!ps on hers.

His l!ps moved against her tenderly and softly. He su-cked on her lower l!ps as though it was gonna produce something sweet.

He pulled back when Hailey wasn’t reciprocating the klzz.

He held her cheeks.

“klzz me back” he muttered.

He slammed his l!ps on her and like someone being hypnotized, Hailey found herself responding to the klzz.

Charles klzzed her de-eply, his hands going und-er her singlet as she hadn’t changed her clothes yet. His hands caressed her b-are back softly and Hailey [email protected] into his mouth.

When they were both into the klzz, Charles’ phone rang and they were forced to break it.

Charles brought out his phone from his jacket and he frown when he saw his father calling him.

He wanted to ignore it at first but Hailey told him not to. He had no choice but to pick the call.

“Why are you calling me? I’m on a business trip right now” Charles said.

“More reason why I’m calling you. Since you’re on a business trip, tell Hailey to come over. The house feels lively with her around” Mr. Monterio said.

Hailey stared at Charles in shock.