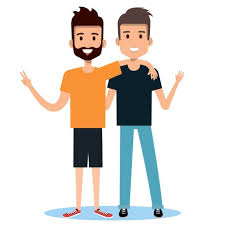 She was shocked and surprised at the same time, this was the same person she badly wanted to see but now that he’s here she doesn’t even know what to do again

“Is your dad home?” He asked

She blinked twice before turning to him

“I…yes, is there a problem?” She asked

“You see, I told you but you won’t listen,” River said to Adam

“What about my dad? Is there a problem with him?” Karan asked confused

“Everything about him is a problem, am going,” River replied but he was still standing there

“Karan, who is that?” They heard someone’s voice and River shifted backward

“Em… Can we talk,” Adam finally said and she was stunned

His voice changed, he was more handsome than before, and to say that he has that charming smile on his face

“Sure,” she replied and stepped away from their house

They sat on a bench in their garden

“Heard you will be moving to college next week?” He said

“Silly, we not me. you will also move to college,” she replied and he chuckled softly

They start staring at each other again till they started leaning closer just when their l!ps were about to touch Mr. Brown spoke up

“klzzing my daughter in my house?” He said staring at them

They both stare at him and stood, Karan made to walk away but Adam hold her hand and pulled her back

“Am sorry but I think I love your daughter,” He said and capture her l!ps immediately making her eyes widen

She was shocked thinking if her father’s reaction and just when she was about to reciprocate he broke the klzz and looked at her then turn to Mr. Brown who was still waiting for him

“I love you Karan, have never felt this way before and it’s fine if you don’t love me, I will wait till you……

“Stop talking, am in trouble already,” she whispered

“klzzing my daughter outside my house, wow! You’ve got some balls…come here,” Mr. Brown said

River holds his breath thinking of the worst

Adam walked over to him and he put his hand across his neck before going inside, Karan and River just followed behind

“If you break her heart I will eat you roughly,” Mr. Brown said

“Only only a growing adult,” Adam replied

“Then you will fight me,” Mr. Brown added

“Have never fought a bouncer all my life, and you’re three times my size,” Adam replied as they went into the house

A DAY BEFORE KARAN WILL LEAVE FOR COLLEGE*

“Karan, can we talk?” He asked gently

“About what?” She asked

“Karan listen, I know I have been a jerk and a d*ckbead and I just want to say that am sorry, I come to realize that sometimes letting go of the people you love is the best option, and not hurting them, I caused you so much pain and am here to say that am sorry, the truth is that I was threatened to live you but am happy that you are happy with someone that deserves you,” he said with his head bent

“It’s okay, Ben I forgive you a very long time ago,” she replied with a smile and left

Shortly after she left Devi came out of her hiding place

“What were you doing with here?” She asked

“It’s over between us,” He replied and walked away

She just stood there without knowing what to do, the music band kicked her out and now Ben Dumped her

Karan walked up the stage and the crowd cheered for her, she hold the mic and take a deep breath

“This song is dedicated to someone special to me, the only person that took away my sorrow and replied it with joy,” she said with a smile

The crowd cheered her up as she started, they started with the instruments as she took over

I was waiting for so long

for a miracle to come

everyone told me to be strong,

hold on don’t shade a tear, through the darkness and good times…

I know I would make it through and the world thought I had it all but I was waiting for you, hush now…

I see a light in your eyes, it’s almost blinding me. I can’t believe I have been touched by an angel with Love…

Let the rain come down and wash away my tears! Let it fill my soul and drown my fears! let it shatter the wall for a new sun cos a new day has come…

When it was dark now there is light, when it was pain now there is joy, when there was weakness I found my strength, all in the eyes of a boy, hush now…

I can’t believe I have been touched by an angel with Love.

She was overwhelmed with joy cos of the reaction, she didn’t know that she can do it, Adam went up to the stage and took a mic

“That’s my girlfriend!!!!” Adam shouted into the mic

“Hey, are you gonna keep avoiding me?” Olivia said walking over to River but he saw her and started working away immediately

“You denied me, Olivia, how could you do that?” He asked

“Am sorry, you saw my dad and he’s not good with anyone that went against his rules, if he knew that you came to our house for me by now I would still be in detention,” she replied with a guilty look

“Why didn’t you tell me,” he said still frowning

“I already said sorry countless times, you don’t have to go to college with a frown on your face,” she replied

“I failed,” he suddenly said

“Am serious, I failed because I wanted to wait for you so that you will keep being my gossip mate,” he replied

EVERYTHING HAPPENED SO FAST

Karan moved to college and thankfully they got in the same college with Adam, Adam still didn’t tell river anything about where he went to

The witch queen was trapped and her dark magic was destroyed

Mrs. Brown later brought up the case of the girl that was ra-pe d but couldn’t say what happened, she convince the girl till she get solid proof and put the guy behind bars

Olivia has one year left in high school before she joins her sister in college and thankfully River stayed behind, sometimes she wonders if he just stayed because he wanted to or something more

River came close to the Brown family and he could visit them sometimes before Adam left for college, he thought about going to see their father the king, and their sister joy but River said no since they don’t know where to start and their village was on top of a cliff

They all live happily ever after as one big happy family ❤️

You guys have been the Best so far, thank you for all your love and support

How was the story? ⁉️

What did you learn in the story? ⁉️

What was your favorite and worst scene ⁉️

Who was your favorite and worst character⁉️

What made you read till the end ⁉️

If you could act as a character who would you act ⁉️

How was the ending ⁉️

Brought to you by Authoress Rosy