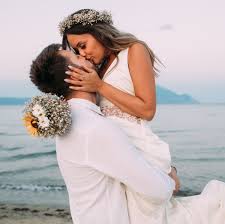 Gabrielle stared straight at him for a moment before answering.

“For the record I don’t know this man and I won’t lie I also have some hatred towards him so do what you nee-d to do.” She said and nodded.

“Do you have a personal grudge against him?” He asked as she snuggle close to him.

Ah! She missed this feeling.

“He killed my brother.” She sighed and he planted a ki-ss on her forehead without saying a word.

Gabby took it as his way of comforting her.

“Let’s not fight anymore okay? I almost went cray cray when you weren’t talking to me.” She muttered as she trail her f!ng£rs around his tattoo.

She couldn’t deny the fact that she missed his company so much she was almost loosing her mind. She knew what she felt isn’t love. Maybe an attraction and she’s positive he feels the same attraction she felt.

Maybe is the s£× or the bickering she just couldn’t pin point what attracted her to him.

“Hmm okay.. have you eaten?” He suddenly asked and felt warm inside.

He always cared more about her health.

“Hm what about you? And please don’t lie to me.” She glared at him playfully.

He always risking his health and she’s pretty sure he has been keeping himself locked up in his office working his a$$ off.

“I did but I’m still craving for more.” He smiled mischievously and began planting ki-sses on her neckline earning a giggle from Pher.

“Not that kinda food dummy!” She slapped his chest and he muffled a [email protected]

“But that’s the kinda food I want.” He whispered against her skin as he kept teasing and ki-ssing her.

Their night was rather blissful but not for everyone tho.

“What do you have for me?” Michelle asked the moment she stepped into the back SUV waiting for her.

The man in black handed her a brown envelope in it contains information and cash she would nee-d.

“The boss wants you to create some troubles for Xavier Williams, enough troubles to keep him busy for some time.”

“What about his wife?” How could they ask her to create trouble for someone she loves.

“The boss insisted she shouldn’t be touched. You mustn’t go near his wife no matter what.” He warned for he knew what was running through her head.

“And why is that? If you wanna create trouble for him you should kidnap his wife and torture her alittle.” Michelle voiced out her irritations.

“You don’t have to know why just do as you’re told to avoid getting into bigger problems.” He gave another stern warning.

Michelle is very impulsive and tend to ruin a good plan.

She’s probably someone the boss took interest in and doesn’t want her pretty face to be ruined.

‘don’t worry Drako I would make sure her face is untouched.’ she thought and exit the car.

The man in black could only shake his head as he watched her walked towards her own car.

“At this point it won’t be surprising if she actually ended up dead.” The man in black said with a small smile.

“She’s a stubborn fly that can’t be saved.”

“Hmm let’s go our work is done here.” The man in black commanded and the driver immediately turned on the ignition and drove off.

The next morning at the Xavier’s mansion.

“There’s absolutely no way I’m letting you come with me to the company in this condition.” Xavier refused letting Gabby resumed her duties at the company.

Her wounds are yet to heal and he won’t take the risk of her stitches opening up again.

“I said I’m fine there’s nothing to worry about.” Gabby tried the poppy eyes but he wasn’t ready to give in to her demands.

“I thought husbands are supposed to give in to their wives? ” She turned to the butler who seem to look away immediately.

“Sir Godvric Lord Xavier said he hates me what should I do now?” She faked a tear.

“I never said that little bug, I only said you ain’t coming with me.” He couldn’t help but sigh.

His wife was indeed childish and surprisingly he isn’t irritated by it.

“That’s the same thing as hatred.”

In the end Xavier won and Gabby ended up not going with him but that didn’t mean she was gonna stay idle at home.

She was gonna have lunch with Kathy at a restaurant.

Once she was all dressed she asked the driver to take her to the restaurant.

She was unable to see Kathy for the latter was outta the country for some important business.

Kathy is a supermodel was almost never around as she was always outta the country.

Gabby adorned a baggy jean and a white T shirt paired with sneakers and a little Teddy bear bag.

The ride to the restaurant was a thirty minutes ride and it didn’t take long to arrive.

“Please wait at the parking lot.” This was a driver for Ross rode with the boss today so he couldn’t take her.

“Okay ma’am.” The driver nodded and drove towards the parking lot while Gabrielle walked into the restaurant her friend was.

“Hey girlfriend over here!” She heard Kathy’s voice and found her by the table overlooking the garden.

“How was your trip?” Gabby and Kathy hu-gged the moment she got close and sat down opposite her.

“Stressful but it was worth it. Gush! Look at you girll!” Kathy also impressed by what he saw. She was happy see her friend glowing like an angel, master Xavier was indeed taking good care of her.

Gabby’s bandage had been taken off her head and her hair was covering her injury for it’s not fully healed and she’s not planning on telling Kathy about it.

“Oh please stop teasing me Kathy you look great I almost couldn’t recognize you.” Gabby grinned and picked up the menu to order her meal, Kathy do too.

“I’ve to look my best always and also watch what I eat.” She heaved a sigh.

“You see why I didn’t want you to be a model? As for me I’m more a business person than a model.” Gabby ticked her order and handed it over to the waitress standing by including Kathy’s.

Unbeknownst to them Gabby’s driver had been killed and replaced by another person.

“Aww so you can be working alongside your husband?” Kathy wiggled her eyebrows at her friend teasingly.

“You should get married too you know…. So you can stop teasing me.” Gabby said and the both burst into ripples of laughter.

It has so long the two had quality Time together. Gabby and Kathy had been friends forever and seem to share mutual understanding.

“Why don’t you play the match maker between me and Lord Xavier’s friends so I can find my own Mr right too.” Kathy pouted her l!ps earning another laughter from her friend.

“Lord Xavier doesn’t really have friends for everyone is basically scared of him. He grew up with the servants so they’re the only family he has and friends too.” Gabby explained and Kathy felt pity for him.

It must have been ha-rd growing up without any family.

“That explains why he’s so aloof and cold.” Kathy picked up her smoothie and enjoyed herself.

“Yeah I guess.” Gabby’s order was a chocolate milkshake since was allergic to strawberries.

She lucky to have parents even though she wasn’t talking to them.

After spending some quality time together Gabrielle decided to go back home.

After watching Kathy drive away she went to the parking lot and found her ride with the driver waiting by the driver’s seat.

She got into the back seat without staring at the person on the driver’s seat.

She closed her eyes and rested her head against the windshield as the car was brought to life and drove outta the parking lot.

The ride was going slow at first before she noticed he’d increased the speed.

She opened her eyes and looked outta the window only to notice they’re going the wrong way.

” You’re going the wrong way,What’s going on? “She asked but the driver ignored her and began going really fast.

She began to Panic when the car was going really fast.

She tried to open the doors but it wasn’t working.

“Who are you? Stop the car right now!” She shouted but he focused on driving without saying a word.

The driver covered his face with a mask and released sleeping [email protected] in the car.

Gabby tried to fight it but to avail and eventually fell unconscious.