enchanted by a cursed prince episode 5 & 6 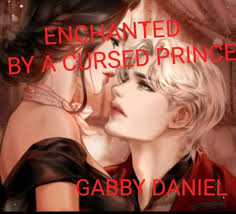 ENCHANTED
BY A CURSED PRINCE

(His personal taste from another world )

“holy moly! ” a maid blurted out and immediately covered her mouth with her hand

The maid eyes wi-dened as if it’s gonna pull out of its socket. She stared at the blood oozing out of his head

She trembled in fear as she leaned on the wall staring at the prince in horror. The reflection of the light shone in the palace and she watched the prince who uses his hand to cover his eyes

“My brother……! ” Princess Celine called and rushed to him.

A guard came almost immediately. He [email protected] and looked away. The sight was horrible.

“What’s going on here…….! ” A thun-derous voice said making the maid and guard who just saw the prince froze on their spot

“My king……. ” The guard couldn’t complete his statement as the king di-pped the sword into his stomach. His mouth pa-rted as blood gestured out

Yeah! This isn’t the first time she is seeing her father killing someone but yet, she can’t get over it

“Celine……. Take your brother to his room… Now!! ” He ordered

The king turned his gaze to the maid who still stood there. She started shivering and moving backward as the king walks towards her with the sword

She fell on her knees and started crying

“My king….. Please don’t kill me…. I’m…. ” She couldn’t complete her words before the king cut off her neck leaving all the maids who had just rushed in, in fright

Immediately the king was out of sight…. They all raised their head and murmuring aro-se immediately

“jeez….. Two people gone this morning…… ” A guard mumbled and shook his head in disbelief

“I can’t keep working here o…… I’m leaving before I die….. My life is just too precious for me ” Another said

“Norman…..! “Princess Celine called and started crying again. She traced his cheeks with her fin-gers. Prince Rex tucked his hand into his inner pocket as he stared at his brother

“My son….. ” Their mother rushed into the room. She stopped on her track and her heart abruptly stopped racing

“My son….. My Norman…… ” She said and rushed to him. Tears rushed down of her eyes like a running tap.

“Who did this to your brother…… I won’t spare him or her! ” She uttered raising her index fin-ger

“No doctor is coming until I have said so…. “They heard a strict voice that sounded more powerful.

“No doctor is coming to see him until it’s evening! ” He snapped out and Queen Emily stood up

“Listen to me jasmine…… I won’t seat here and let you kill my son for me!!…… Tell me what this innocent boy had done to you…… Tell me… Does he deserves this treatment “She muttered

“My words is final……. No doctor is coming here until it’s evening…… Leave my queen don’t make me for-ce you! ” He said and stared at the b©dyof Norman

“What are you saying father…….. Norman is bleeding….. He had lost lots of blood yet you said the doctor is coming by evening……. What if he dies before the doctor comes huh!! “Princess Celine asked staring at her father in disgust

King Jasmine turned and started walking to the window

“no outsider apa-rt from the royal home is allowed to see the Prince until is night…….. Norman will be fine…… You all are just getting paranoid for nothing……or do you want the doctor dying after getting him treated?? ” He asked and the queen shook her head.

“I hate you father! ” Princess Celine suddenly yelled and ran out

Prince Rex took his l-ip in as he watched every one of them.

“You will regret this……. That I can promise you….. If anything should happen to him….. You will leave to bear the grief all the rest of your life

“I won’t let you live and bring grief to me…….. You’re cursed to the royal home….. “He spat out and clenched his jaw before walking away
.
.
.
.
.
Elder Kay rushed into the palace compound immediately the big gate was opened. He had came yesterday night but the big gate was shut already. Having no option, he sle-pt outside the gate

He increa-sed his pace and walked into the palace. He stopped at the hall way as he heard some faint sounds

“The mark……. The red mark that had to do with Norman…… I saw it on her wrist” Elder Kay heard a voice that could be recognized as the king voice

“impossible…….! ” Another voice shipped in and Elder Kay [email protected] The voice sounded like the priest voice

“She got a scar and the incident that happened years back flashed into my memory………….. Priest ! Who’s she??….. Is she one of my nightmare??……is she the revelation! ” The king asked in a shaking tone

“The red mark means one thing….. The scars means another ….. I will go back home and arranged this riddle. I will get back to you…. My king” The priest said making Elder Kay eyes wi-dened

“Giselle……… My Giselle is here.” he muttered and started walking away

The faint cries woke Giselle up from her slumber. She ru-bbe-d her eyes slowly and felt pains from her bo-dy

She suddenly [email protected] as it occur to her that she was still un-der the prince be-d.

Yesterday night wasn’t easy for her. She tried escaping but it was to no avail.

She heard cries that seems like his voice but no other voice. She slowly popped her head out of the be-d and a catch a glimpse of the room. She heaved seeing it empty…… She came out completely and her stomach made some crazy sounds

She was damn hungry!

She [email protected] seeing blood on the be-d…

his eyes got teary quickly…the more he strained his eyes to see,the more his sight gets blurry.

“Stop crying……. Why will they leave you in this condition…… I’m gonna help you” Giselle said staring directly into his purple eyes but he was staring at somewhere else making Giselle wondered if he’s actually seeing her

Giselle swallowed ha-rd and climbe-d down from the be-d….. She stared around looking for a bathroom. She saw one and quickly entered.

She re-moved his father scarf and made it w£t. She came out and hurried to prince Norman

“I’m only gonna help…….. Please don’t scream or I will get caught! ” She said and slowly she placed the scarf on his head. She started wiping the blood slowly

The more she wipe….. more blood continued oozing out.

“I will just tie it round your head to stop the blood ” She said and folded the scarf neatly. She raised his head and placed the scarf round it

“it hurt….! ” Norman spoke out shutting his eyes ti-ghtly
The pains was burning and unbearable…… He wanted to scream out badly

Giselle felt it and shook her head

His screams were heard faintly as she ki$$ed his l-ip slowly.

King jasmine 😩😩🤧🤧……one word for him guys

What revelation is king jasmine and the priest talking about???

Her scars…….. The incident. What do you un-derstand by that word

Who just burst the door opened 🙆🙆😯😯

I spend hours typing this….. So I see no reason you can spend a minute and comment on it

If you wake up and can’t find this page….. Pls don’t come to my dm because I have banned u