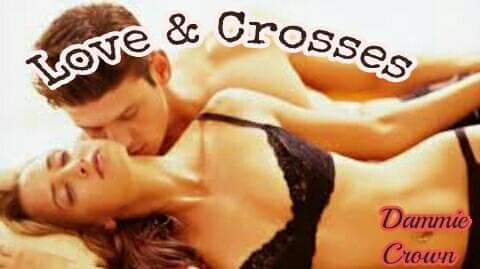 WARNING❌ DO NOT COPY OR REPOST THIS NOVEL WITHOUT THE AUTHOR’S PERMISSION.

“Gosh..why do you always smile even when in trouble?” Dammie asked.

“Leave my brother now or you regret it later.” Dammie said sternly.

“Why? Is it because of your secrets that are with me?” Cindy asked still beaming in smiles.

“And what if I say yes?” Dammie said slowly.

“Chill. I have nothing I mean absolutely nothing to do with you or your secrets. It just has to happened that I knew about it. I care not. You own your life and you are free to live it the way you like. I own my life too and I’m free to live it the way it plea-ses me. So, miss Dammie Scott…If I have issues with it, I would have told my fiancee a long time ago…but because there’s no reward for it either I let him know or not, I kept cool. Just chill. you are in safe hand.” Cindy said and smiled.

Dammie’s mind drifted to what she heard Thomas said earlier…that her boss’s wife is pregnant. And…the only female she knew that it could be is Cindy ’cause her picture is on his table and his phone wallpaper. But the Cindy here in her front doesn’t look like a pregnant lady. Or is Cindy a twin?

“Whatever. I don’t give a f*king damn whether you tell anyone or not. all I want is that I don’t want you for my brother. Leave him alone. You don’t worth him. he loves someone else.” Dammie said.

“You’re joking miss Dammie. St©p what you’re saying, you can’t just st©p us from getting married in the next three weeks. Okay?” Cindy said but Dammie was smiling looking at the entrance of the restaurant.

Cindy wondered what and why but she care not.

“Anyways, that’s all I have to say.” Cindy said and stood to leave.

She had just taken three steps when she halted seeing Emmanuel with her PA holding hands and she was so closed to him..

Cindy felt a sting of jealousy but she acted like nothing.

She continued walking and walked [email protected] them without looking at them a bit.

Emmanuel didn’t noticed Cindy ’cause he didn’t even know what he [email protected]£ to the restaurant to do.

Dammie stood up to meet them after ma-king sure Cindy has seen the scene.

That was what she instructed Jenny to do – to hold hand with Emmanuel and walked side by side with him closely.

“What are you here for?” Emmanuel asked when she got to them.

“to have a little talk with your wife. She’s out there with a man though.” Dammie said.

“What have you done Dammie? And you…” Facing Jenny.

“What’s my hand doing in yours? Is this you guys plan? Jenny…you are fired!’ Emmanuel said and rushed outside.

Luckily Cindy was just about to close the car door.
Emmanuel quic-kly ran to her and held her hand from closing the car door.

Cindy didn’t bother looking at him and left the door for him too.

Emmanuel looked at her before walking to the other side to enter.

Cindy closed her side car door and if she was able to drove away, she would have done so but Emmanuel was fas-ter. He opened the car door and entered.

“This isn’t any of your car.” he said

He got no response.

“Cindy…?” He called again but no response.

Cindy wasn’t even looking at his direction. She kept a straight face looking at the other side.

“If it’s about what you saw…it’s really nothing. I have no idea it was planned by Jenny and Dammie. I’m sorry, okay?” Emmanuel said.

Emmanuel held her left hand and squee-zed it delicately.

Cindy made to free her hand from his grip but Emmanuel was stronger.

“Why are you acting like this? It’s not like you saw us in the be-droom.” Emmanuel said.

“Whatever! Just let go of my hand. Go and hold your PA’s hand as you like.” Cindy said trying to free her hand again but to no avail. Jealously was showed in her voice.

“Babe…I’m sorry. It’s really nothing I swear. You just misun-derstood the whole scene. It was planned..I have no idea. But trust me, that’s the end of Jenny’s work with me. I’m firing her right away. I hate nons-en-se. So babe, plea-se..I’m sorry.” Emmanuel pleaded pe-cking her left cheek.

Cindy shifted away from him before facing him still keeping a straight face.

“It’s alright. Can you just get down from the car?” Cindy said.

*thank goodness you said ‘the car’. Who owns the car anyways?” He asked.

“It’s none of your concern whether the car is mine or not. Just get down.” Cindy said jealously.

“But Cindy…it isn’t up to this. Are you angry at me? Okay…I’m sorry…I’m sorry millions of time.” Emmanuel said.

But, the stubborn Cindy wouldn’t give in.

“Okay, I will just go to Jenny then if that’s what you want.” Emmanuel said about to open the car door but Cindy quic-kly st©pped him holding his arms.

“you wouldn’t dare!” She said.

*can’t believe my wife can be this jealous.” Emmanuel said smiling.

Cindy rolled her eyes at him pouting…

*who don’t get jealous?” Cindy said.

*but yours is too much. You scared me.” Emmanuel said.

“I’m sorry but can’t you see how that girl holds your hand and also walking so close with you. It really got to me.” Cindy said…

“Sorry. That’s her end anyways. I wouldn’t want anything or anyone to make you jealous or comes between us.” Emmanuel said.

“That’s is! You’re always soft. Don’t you know the implication of what she did? She almost get us separated!” Emmanuel said.

“Let’s leave her alone. It’s some weeks to our wedding and you know you’d be busy with lots of things. She would be in charge of everything in your abs£nce so leave her. getting a new PA wouldn’t be a right thing for this time. This is the time you nee-d Jenny the most.” Cindy said.

“But I really want her to leave.” Emmanuel insisted.

“Alright. Anything for my babe. hope you are not angry again?” He asked.

“Who owns this car?” He asked.

“Why did you [email protected]£ here with it? Did you ran out of fuel? You’d have called me.” Emmanuel said.

“no. forget about it. Something [email protected]£ up.” Cindy said simply.

“alright. you can tell me anytime. What did you [email protected]£ here to do anyways?” He asked.

Cindy gave her phone him.

“Check my messages.” She said.

Emmanuel knew her [email protected] so it was easy to get access to her phone.

“How’s this possible? It must be from Jenny.” Emmanuel said.

“No my dear. Calm down. She’s not in her right s-en-ses. I believe she’s gonna repent.” Cindy said.

Let me get going…

“I love you.” Emmanuel said.

“I love you too darling.” Cindy said.

“It’s not as if I’m beating you.” Cindy laughed.

It was getting late when Cindy got to her mansion.

She walked inside the living room and looked around.

She sp©tted Samuel slee-ping peacefully like a new born baby on the couch.

She walked to him and squatted beside him.

“I can’t just disturb your sweet sleep. What do I do? Your wife is waiting..” Cindy said.

Samuel’s phone rang beside him. She checked the caller – his wife.

She silenced it and placed it beside him.

She gently stood up and sat on the couch tiredly. She was too damn tired.

Alice was in thought waiting for her husband but she didn’t see his sign.

She sighed sadly for the uptenth time today on the couch she sat on.

“I hope all is well. He’s not picking his calls too.” She said sadly.

“He has never for once sle-pt outside. What have I done?* she said.

Her phone rang. She hope it’s Samuel but it turned out to be George.

she gro-an ed before grudgingly picking it.

📲just to let you know I have no time to keep your secret again.

📞what does that mean?

📲it means your husband would soon know the real you. You can’t leave in luxury peacefully and left me here with nothing after what you turned me into.

📞you kept saying that. What did I turned you into?

📲you will get to know soon.

“What life is this? Finally, the end has come. But I can’t just let go easily like this,right? I must do something.” Alice said to Herself.

He had just returned from school.

They’re at the dining. Phili-p, Peter, Joy and Mrs Monica.

“Yeah. Me too.” Joy concurred.

“What about you bro?” Peter asked Phili-p.

Phil!pdropped his spoon. He wasn’t really eating before though. He stood up and left the dining leaving everyone in awe.

“What’s wrong with him?” Joy asked.

“What happened to him?” Peter asked.

Mrs Monica was just staring at the direction Phil!ptook.

Mrs Veronica was calling Cindy but she’s not picking.

She was worried about her. She called Samuel too but he wasn’t picking his Calls too.

She called Emmanuel…and he told her she’s left few hours ago. Besides, he just met her in a restaurant.

This made Mrs Veronica more restless.

“What could have happened to my daughter?” she wondered loudly.

Mimi was on her be-d wondering.

“What could be behind this issue? Thomas….Phili-p….Cindy….I wonder. But the thing is, the Lady isn’t Phili-p’s wife. Why would she be his wife when she’s still a vir-gin? And besides, Thomas said she has issue with giving birth, for someone to have issues with conceiving, she’d have had lots of s’xual int£rç0rs£with her man. But her case is different.” Mimi thought on her be-d.

“I’m gonna see how it goes. Although, I’ve got paid but that doesn’t mean the young lady will suffer . What could she have done to them for her to be punished this way? I’m not gonna watch. I must act.’ Mimi thought smiling at her thoughts.

She pu-ll-ed the duvet to herself covering her entire b©dy and gently closing her eyes.