Key to my heart episode 33 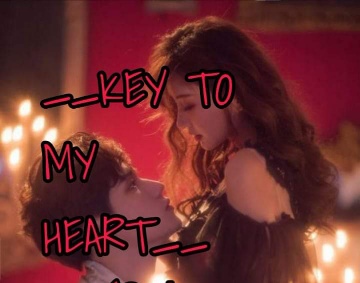 The students sat down getting re-ady to write the test, the teacher entered with the scripts and a guy putting on [email protected]

Nina creased her brows when she saw him, he’s the guy they were bullying earlier

“Introduce yourself to us” someone yelled from the back

“Eliot what?” A girl asked

“Eliot… Eliot” he replied while sweating and shaking

“He looks scared” Ming whispered and Benedict nodded while laughing

“I don’t think it’s nice for you guys to be laughing at him, he looks like he’s going throu-gh a lot” Nina muttered

“Did he pour a bucket of water on his b©dy, someone explain why he’s sweating toomuch” a girl said and students continued laughing

“Eliot take the sit beside Nina, anyone that laughs won’t write the test anymore” the teacher snapped and everyone kept quite

Eliot took the empty chair beside Nina, Nina a looked at him and waved but he faced his desk instead

“So let’s start shall we?” The teacher said, arranging the scripts and getting re-ady to share

Tom is busy on his [email protected]©p while Christan is busy on a script, they sat opposite each0ther, their eyes met and they glared at themselves

The [email protected] door opened and Bella stepped in with a bright smile, Christan immediately turned to her happily

“Good morning B… What are you wearing?” He asked and looked at her head to toe

Bella is wearing a designer t©p and Sk-irt, pure gold Jewelries that made her b©dy lit up, perfect makeup but she’s putting on a big male sli-ppers. Totally off point!

“Oh, I have swollen foot so I gotta Wear this” she replied with a smile

“O-okay, so good news, Long Jie has arranged everything for the concert, the place, chairs, table, your limo, lights effect are all set for next week, even your tickets are almost sold out” Christan said

“Wow that’s great, Tom what are you working on?” Bella asked and took her sit

“The music, the beats and sound, we’ll nee-d…

“Really?, Go ahead and approve of it” Bella smiled

“Alright B I’ll do just that” Christan took his phone and walked out, glaring at Tom as he left

“What’s up with you two Tom, what’s with all the beefing?” Bella asked, opening her bag and searching for something

Tom immediately stood up from his sit and rushed to her

“You won’t believe Christan asked me out” he said

“Yes, and I told him I don’t do [email protected] then he got mad at me”

“You don’t do [email protected]?” She asked and cleared her throat

“Yeah well I’m not sure but I’m sure I don’t do [email protected], even though I’ve never been in a serious relationsh!pbefore but I do [email protected]£ girls, this is the first time a guy would be asking me out and I’m freaking out cause I don’t know what to do” Tom said

“You don’t know what to say don’t you?” Tom asked in a dead pan tone

Bella slowly blobbe-d her head up and down, Tom sighed and went back to his sit to continue what ever he was doing

“Ha!” Bella exclaimed and brou-ght out the small container of cream Andre gave her, she looked at it and smiled

*Call me when the cream finish and I’ll get you a new one right away..* she remembered what Andre had told her on Saturday

She looked at it and opened

“It finished this evening” she smiled and began emptying it.

Andre kept typing on his [email protected]©p and yawning, he looked up at the door and called Vida for the umpeeth time

Vida [email protected]£ in with a frown, she knows what he’s going to ask

“Is Rebecca here?” He asked and shook her head

“Ok you can go” he sighed and Vida left

It’s a picture of Luli with her school uniform, she had just started her school today

Caleb got in without knocking, he sat opposite Andre and smiled

“Thanks” Andre muttered and sipped from it

“What’s up with you, you’ve been moody since Saturday won’t you tell me” Caleb asked

Andre sighed and rubbe-d his temple

“Rebecca broke up with me” he dropped the bombshell

“What?” Vida mouthed as she placed her ears on the door

“Yes Caleb, she left me when I nee-ded her the most” Andre said sadly

“Come back for what?, It’s good as she left now you can be free and maybe you’ll find someone else that deserves you” Caleb said

Vida smiled from outside the door. Finally Rebecca is gone that means she still has a a chance

“I don’t know about it Caleb, I can’t just move on quic-kly, I’m not a robot I still love her so damn much” Andre muttered

Vida smiled and happily to her office, finally Andre is free from Rebecca finally he’ll get to notice her and her love for him

“Damn the test was so tough, Ming you’re sure you’ll buy a ticket for me?” Benedict asked for the umpeeth time

“And you, you’ve been frowning since morning what’s your own?” She asked

Ming looked at Benedict and Benedict shurgged, they both ran after her

Luckily the que wasn’t too long so their food got to them real quic-k, they went to a table and settled down to start eating but noise began

Nina snapped her head up to look at them, since morning Camilla has been following Alex up and down like a chicken

Alex ordered and went to sit while Camila is still ordering, Alex raised his head up and his eyes met with Nina, he looked at her but she looked down at her food

“Gosh, we nee-d more food supply in that cafeteria, can you believe they don’t have chicken soup” Camilla frowned coming to sit with Alex

“Aren’t you tired of following me around?” Alex muttered

“Never, I’ll keep on following you till you give me your attention” Camila replied with a smile and Alex scoffed

Nina rolled her eyes and looked another side but her eyes cought Eliot, he’s sitting alone and looking at everyone, no food, no water

Nina feels pity for him so she stood up and went straight to him, she sat opposite him and placed her lunch on the table

“Hungry?” She asked but he looked away

“You don’t have to feel shy, I wanna be your friend” she said

He snapped his head towards her and stared at her

“Really?” He asked and she nodded with a smile

“Here, have mine I’ll get myself a new lunch” she pushed her food towards him

He looked at it and his tummy began grumbling

“You don’t have to feel shy, you’re hungry it’s obvious” she chuckled

He took the fork and took small out of the pasta and ate, then he began eating fast cause he hasn’t eaten since yesterday

He reduced his pace, some sauce stained on hisl-ips. Nina brou-ght out her tissue paper and wiped hisl-ips for him

“You’re right, I don’t have money that’s why” he muttered and looked elsewhere

“You’re a scholarsh!pstudent?” She asked and he nodded

“We are the same, those are my friend over there I’m sure they’ll like you” Nina said

“Nina, my name is Nina, your name is Eliot right?” She asked and he nodded

“I think that’s a nice name, my friends will like you I’m sure, do you want water?” Nina asked and he nodded

“Alright wait here” she stood up and left to the counter

Alex eyed followed her as she walked, he looked at Eliot and frowned

“Alex what are you looking out won’t you eat?” Camilla asked, she tried feeding him but he [email protected] her hands off

“Don’t follow me anymore, I want to be alone” he snapped and walked out

Camilla sighed and threw her spoon away. Nina [email protected]£ back to join Eliot, she handed him a bottle water and stared at Alex direction but she didn’t see him there again

“Where did he go?” She thought

“Miranda Lee” a female officer called. Miranda st©pped her push up and looked up at the woman

“You have a visitor, you get thirty minutes” the female officer said and opened the cell, she handcuffed Miranda and took her out

She made Miranda sit and took off the handcuff

Miranda looked at the person with a frown, the person is wearing a scarf

“Who are you?” She asked